German Shepherds are not as good with cats compared to other breeds such as Golden Retrievers. However, it will largely depend on the nature of the German Shepherd in particular and the way it is raised.

Contents show
1 How good with cats German Shepherds tend to be
2 How to get a German Shepherd to get along with cats
2.1 Give it positive reinforcement training
2.2 Avoid negative reinforcement
2.3 Take it to a dog training class from an early age
2.4 Neuter or spay it
2.5 Give it lots of exercise
2.6 Give it attention
2.7 Feed them separately
3 What might cause a German Shepherd not to get along with cats
3.1 Strong prey drive
3.2 Jealousy
3.3 Cats like to run
3.4 Being dominant
3.5 Wanting to play
4 What to do if your German Shepherd does not get along with cats
4.1 Separate them
4.2 Give it training
4.3 Give it lots of exercise
4.4 Feed them separately
4.5 Keep it away from other cats
4.6 Get help from a dog trainer or behaviorist
5 Things to consider about German Shepherds and cats
5.1 They can be quite stubborn
5.2 It helps to start training it as a puppy
5.3 Other breeds that are known for being better behaved around cats

How good with cats German Shepherds tend to be

German Shepherds are known for having a strong prey drive. This means that it is often in their nature to chase small things that run such as cats and they have been known to harm cats.

With that being said, there can be a big variation in how well German Shepherds get along with cats. So, it will be largely dependent on the GSD in question.

Something else to consider is that German Shepherds can be territorial and dominant dogs. This means that if the cat tries to do things such as to sit in the spot where the GSD likes to sit, it might cause the GSD to react unfavorably. With that being said, this type of behavior can also be corrected with the use of training.

So, If you are thinking of getting a GSD, it will be important that you ensure that you will be able to devote the time necessary into training it so that it learns how it is meant to behave.

Another thing to consider is that they can become jealous at times. So, if you give your cat a lot more attention than the GSD, it might cause it to become jealous. However, this can be corrected by spending lots of time with the GSD by doing things such as walking it, training it and playing with it.

I personally love German Shepherds and this whole blog is built around them. However, I am also aware that they have a strong prey drive and that it can cause them to become dangerous around cats. I would hate for you to get a GSD only to find that it does not get along with your cat, leaving you in a difficult situation.

There are other large dog breeds that are similar to German Shepherds but tend to be better behaved around cats. It might be better for you to get one of those breeds instead.

An alternative large dog breed that you might want to consider would be the Golden Retriever which is known for being well behaved around cats.

How to get a German Shepherd to get along with cats

While German Shepherds do have a strong prey drive which can make it difficult to have them around cats, there are still some things you can do to get them to be better behaved around cats.

Give it positive reinforcement training

Positive reinforcement training is where you encourage the behaviors you want to see from your GSD by rewarding it when it shows signs of displaying them.

To train your German Shepherd to get along with your cat you’ll do it in three stages. First, you’ll teach it to stay, then to stay when it’s being distracted to stay when the cat is around.

I have written about how to teach a German Shepherd to stay and how to do it when being distracted in the past here.

After you have taught it to stay when being distracted it will be time to slowly introduce the cat.

You’ll do this by telling your German Shepherd to stay and then start by just putting the cat in the same room.

However, while you can use training to get your GSD to be better behaved around cats, it does still act upon instincts. So, it is important to make sure to take extra precautions so that your GSD is less likely to harm the cat.

Negative reinforcement is where you inadvertently reinforce behaviors that you do not want to see by giving it rewards when it displays them. If your method of getting the GSD to stop bothering the cat is to give it things it wants then it will likely do it more in order to get more rewards.

Instead, it would help to stop it by getting it to come to you, to separate them, to try to redirect its attention before it starts bothering the cat and to give it training so that it learns to be better behaved around it.

Take it to a dog training class from an early age

It would also help to enroll with it in behavior puppy behavior classes when it is a puppy especially if it will be your first time getting a GSD. By doing so, you will be able to get in-person guidance on how to train your GSD puppy effectively.

This study shows that dogs that are not neutered are more likely to be dangerous so it would help to make sure to spay or neuter it.

Give it lots of exercise

German Shepherds are a breed that is meant to get daily exercise. When they do not get enough exercise, they will often look for other ways to stimulate themselves and bothering your cat might be one of them.

This is why it is important to make sure that you will be able to give your GSD daily exercise before getting one.

Generally, it is recommended for them to get at least an hour of exercise per day as healthy adults.

Dogs are particularly likely to be dangerous when they are eating. As a result, it would help a lot to make sure to feed the GSD and the cat separately to reduce the chances of something bad happening.

As mentioned above, German Shepherds are a breed that known to have a strong prey drive. This means that they have it in their nature to chase after small things like cats, rabbits even small dogs.

If you get a German Shepherd and it does not like cats, another possible cause could be that it is jealous of the cat. This would be more likely if it tends to become aggressive towards the cat when you are giving the cat attention.

To correct this it will be necessary for you to give your German Shepherd lots of attention and to give it lots of exercise so that it doesn’t feel the need to be jealous of your cat. However, it would help to avoid rewarding it when it does become jealous.

Another problem is that cats like to run. German Shepherds, as well as most other dog breeds, will naturally chase after small things that are moving. This is why, when you’re teaching your German Shepherd to stay, one of the last distractions you would show it would be a moving toy.

To correct this behavior it will be necessary for you to do lots of training with your German Shepherd on a regular and consistent basis so that you can break it out of the habit of chasing your cat.

If this is the case then it could be that your German Shepherd is trying to assert its dominance over the cat.

Signs that this would be the reason would include your German Shepherd displaying other dominant behaviors such as trying to position itself in higher positions than yourself or being unresponsive to your command (although that could also be a lack of training).

It could be the case that your German Shepherd is just playing when it does it. This would be more likely if it does not interact with the cat in an aggressive way.

However, even if it is just playing, it will still be helpful to train your German Shepherd not to do be obsessed with it using the tips below.

If you do get a German Shepherd and it does not like cats, there are some things you could try doing as mentioned below. I have also written about it more in this post.

Even if it does seem like the GSD gets along with the cat, it would still help to keep them separated so that you can reduce the risk of something bad happening. German Shepherds will act on their instincts especially when they are left alone. So, it is important to avoid taking unnecessary risks with them.

As mentioned above, it is important to get the GSD lots of training, especially as a puppy, so that it learns how it is meant to behave.

Give it lots of exercise

German Shepherds are meant to get a lot of exercise and they can behave in a bad when they are not given much exercise. Generally, it is recommended for them to get at least an hour of exercise per day as healthy adults.

German Shepherds and most other dog breeds can become aggressive when they are eating so a particularly high-risk time is when your GSD is eating. As a result, it would help to make sure to feed your GSD and cat in separate areas so that you can reduce the risk of something bad happening.

Keep it away from other cats

Get help from a dog trainer or behaviorist

If you are unable to get it to leave the cat alone, it would also help to get help from a dog trainer or behaviorist. By doing so, you should be able to see what is likely to be causing the behavior and how to get it to stop effectively.

Things to consider about German Shepherds and cats

Below are some things to consider about German Shepherds and cats.

They can be quite stubborn

When you’re getting your German Shepherd to get along with your cat you’ll likely find that they can be quite stubborn. This means that it will be very important for you to train it regularly, consistently and over the course of months so that you can really change its habits around your cat.

It helps to start training it as a puppy

The earlier you train your German Shepherd to get along with your cat the easier it will be for you. As your German Shepherd gets older its habits of being aggressive towards cats will be more pronounced and harder to change so it’s better to start when it’s still young.

Other breeds that are known for being better behaved around cats

If you have a cat and you want a dog, there are dog breeds that are known for being better behaved around cats than German Shepherds.

Below is a list of dog breeds that are known for being well behaved around cats: 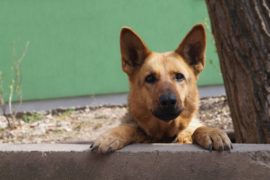 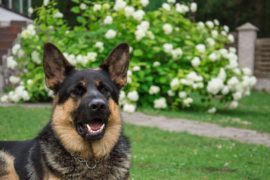