If your German Shepherd keeps circling you, this post will show you why and what you can do about it.

So, why does my German Shepherd keep circling me? Possible reasons are that it is excited, it wants attention, it is a herding instinct or that it is being dominating.

Certain causes will be more likely than others depending on the way that it does it. Once you have a good idea of the cause it will become easier for you to get it to stop.

Contents show
1 Why your German Shepherd circles you
1.1 It’s excited
1.2 It is being dominating
1.3 It wants attention
1.4 It’s a herding instinct
1.5 Things to consider
1.5.1 When it started doing it
1.5.2 When and where it tends to do it more
1.6 What to do about your German Shepherd circling you
1.6.1 Avoid encouraging it
1.6.2 Walk in the opposite direction to it
1.6.3 Give it lots of training

Why your German Shepherd circles you

Each of the different reasons why your GSD does it will likely come with some clues in the way that it does it.

Below, are a number of possible causes as well as what might make them more likely.

The reason why your GSD circles you could be that it is excited. This would be more likely if it does it in situations where it might become excited such as when you are about to take it out for a walk or when you come home and if it shows signs of excitement such as wagging its tail or trying to lick you.

It is being dominating

It might be the case that it does it because it is being dominating. This would be more likely if it does it in a way that prevents you from being able to go somewhere or to leave the room.

In this case, it would be important to give your GSD lots of training so that it sees you as the leader and to recognize when it might be able to become dominating and to redirect its behavior.

It might be doing it because it has realized that it gets attention from you. This would be more likely if you tend to give it more attention when it does it and it does it more when you have not been giving it much attention.

In this case, it would help to avoid rewarding it with attention but to give it attention throughout the day.

The reason why it does it could be that it is a herding instinct. This would be more likely if it does it a lot more when you are walking it. To prevent this kind of circling, try walking in the opposite direction that it circles you especially if it tries to move you.

When it started doing it

When trying to understand why your GSD has been circling you, it would help to consider when it first started doing it since it could be the case that there was an event that triggered it.

If it started doing it suddenly then it would be more likely to be due to things such as realizing that it causes you to give it more attention or because started being dominating.

Whereas, if it has always done it then it would be more likely to be due to things such as excitement or it being a herding instinct.

When and where it tends to do it more

It would also help to consider when and where it does it.

What to do about your German Shepherd circling you

There are a number of things that you can do about your German Shepherd circling you. The best option will depend on the cause of it doing it. Below, are some options that you have.

It could be the case that you have been reinforcing the behavior by giving it things that it wants when it does it.

Instead of giving it things such as toys, treats or attention, when it circles you, try to avoid rewarding it and to redirect its attention when you notice that it is about to start doing it.

Walk in the opposite direction to it

If it does it when you are walking it then try to walk in the opposite direction to it since this will force it to stop and to see you as the leader.

Give it lots of training

It is important to give your GSD lots of training so that it does not start to be dominating and so that it is well behaved and easier to control. If you have not given it much training then it would help to start with the basics. I have written about how you can train your GSD to stay here and how to come on command here.

This post contains affiliate links, and I will be compensated if you make a purchase after clicking on my links. This has no effect on the price you pay and we are very grateful for any support.

Most Recommended For German Shepherds

Our favorite: The Dunbar Academy Training Program. If you want a happy and obedient German Shepherd, this is one of the best online dog training programs available right now. You can get the first month free using This link

Our favorite: The German Shepherd Handbook (on Amazon) - Shows you all you need to know to keep your GSD happy, healthy and well-behaved.

Why does my German Shepherd hide?

Why won’t my German Shepherd stop scratching itself? 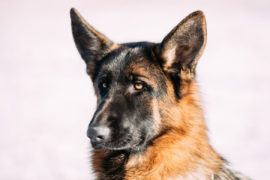 Why won’t my German Shepherd stop scratching the floor?